History of the Parish
The very first Russian émigrés came
to Utica, New York from the displaced persons camps in Germany in 1948, and
began to attend services at the local Antiochian Orthodox Church of St. George
the Great-Martyr in Utica. As the parish had no permanent priest, Fathers
Panteleimon and Joseph of Holy Trinity Monastery in Jordanville, NY, would come
and hold services at St. George’s Church for the growing Russian community,
which then formed the Community of St. Nicholas the Wonderworker, who was not
only the patron saint for travelers but also for those in transit or in exile.
In 1949, the St. Nicholas Community was joined by Archpriest George Pavlusik,
who, with the blessing of Archbishop Vitaly (Maximenko), the ruling bishop at
that time, became the rector of this newly formed parish. By 1951, the parish
had grown to over 300 parishioners, and soon it became clear that the Russian
faithful needed a church of their own. In 1953, the parish was renamed in honor
of St. John of Rila, patron saint of St. John of Kronstadt. Fr. George Pavlusik
and his parishioners had a great veneration for St. John of Kronstadt, and as
he was not yet canonized, it was decided to make the parish in honor St. John
of Rila. It had also been decided to build a two-storey church, with the lower
church in memory of St. John of Kronstadt, and the upper church, in honor of
St. Nicholas the Wonderworker.

The first parish rector,
Mitered-Archpriest George Pavlusik had helped lay the solid foundations of the
parish, inspiring its overall growth with selfless labor and love. After his
blessed repose in 1971, the second rector was Archpriest Igor Hrebinka, who
during his thirty years of service in the parish, accomplished the completion of
the church and its iconography, and also the purchase and construction of a
parish hall, and after his retirement in 2003, Priest Nikita Grigoriev served
the parish until May 2007. Since June 2007 the current rector is Archpriest Michael
Taratuchin. Fr. Protodeacon Joseph Jarostchuk has been serving as the parish’s
deacon since 1969, since 2000 the parish’s second deacon is Fr. Deacon Nicholas Kolasz.

The St. John of Kronstadt Church in
Utica, New York, has been the spiritual home to more than three generations of
Orthodox Christians. Through the holy prayers of St. John, may it continue to
be so to future generations to the greater glory of Almighty God! 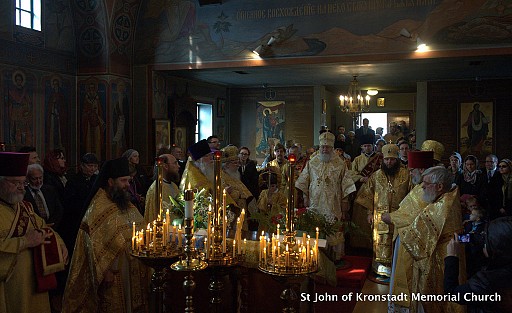 "On Saturday, November 1, celebrations in honor of the 50th anniversary of the glorification of Righteous John of Kronstadt were held at St. John of Kronstadt Memorial Church in Utica, NY. Also celebrated was the 60th anniversary of the founding of a Memorial Fund in the saint’s name, which was originally organized to aid in the church’s construction. At the outset, a two-story church was proposed: the lower floor would be dedicated to the Kronstadt elder’s patron saint, Venerable John of Ryla, while the upper floor would be dedicated to St. John of Kronstadt, with the altar dedicated to the Holy Hierarch Nicholas the Wonderworker. But ultimately, only a single-story church was built, which nevertheless became a monument to the saint and a holy undertaking for its many parishioners.

The Liturgy was celebrated under the aegis of the Protectress of the Russian Diaspora – the wonderworking Kursk Root Icon of the Mother of God; also displayed in church were the holy icons of St. John of Kronstadt and his Heavenly patron, Ven. John of Ryla.

The divine services were adorned by the singing of a combined parish, seminary, and youth choir. At the Little Entrance, in honor of the 25th anniversary of his diaconal ordination and for his dedicated service to the Holy Church, parish rector Archpriest Michael Taratuchin was awarded the jeweled cross.

Metropolitan Hilarion addressed the faithful with a sermon, in which he spoke about St. John, the anniversary of whose glorification was being celebrated that day. The clergy, parishioners, and guests then performed a procession around the church, offering hymns to the Most Holy Theotokos and Saints John of Kronstadt and John of Ryla; the Polychronion was intoned for the bishops and rector.

Protodeacon Joseph Jarostchuk, treasurer of the St. John of Kronstadt Memorial Fund, spoke in detail about the church’s history, gathering funds for its construction, and its adornment and frescoing. After a greeting from Fr. George Kallaur, who had grown up in that church, the clergy and guests of the feast continued their interaction at a festal luncheon."